Overcoming addiction is never easy, but author Susan Shapiro wants you to know that it is possible. In her new memoir, LIGHTING UP: How I Stopped Smoking, Drinking and Everything Else I Loved in Life Except Sex, she describes how she finally kicked the two pack a day nicotine habit she'd had since the age of 13.A funny and honest tale of the trials and tribulations of overcoming addiction, LIGHTING UP is an inspirational read for anyone who wants to change their life for the better. You'll cheer for Susan as she overcomes her panic, depression, and mood swings to conquer her inner demons and find the professional success she's been searching for.

As a freelance journalist, Shapiro has been published in the New York Times, Cosmopolitan, Glamour, and People magazine. One of her previous books, Five Men Who Broke My Heart, is being made into a movie by Paramount Pictures.

Recently, Shapiro took some time out of her busy schedule to answer LoveToKnow's questions about overcoming addiction.

What inspired you to write your book?

"I was having a midlife crisis made worse by 9/11, which is one mile from my apartment," Shapiro said. "Many people my age died and I felt my own immortality. Then I thought, 'I could die tomorrow and never have gotten anything I wanted.' I somehow knew that my frustrations were connected to my not being able to quit my cigarette addiction, but wasn't sure how."

"I began seeing an addiction specialist. He was so eccentric, brilliant and fascinating, and the journey to recovery so intense, that I started keeping a journal about it. As a freelance journalist who had reviewed tons of nonfiction books, I soon realized it was publishable."

"When a section was printed in the New York Times and another in the New York Observer that William Safire picked up in his column, my agent called and we realized I had an engaging original memoir on my hands. All other addiction memoirs were about quitting drinking or drugs with AA, cold turkey or going to a Hazelton-like rehab place to recover. Nobody had written anything funny or interesting about quitting smoking, or about quitting addictions with one-on-one therapy before." 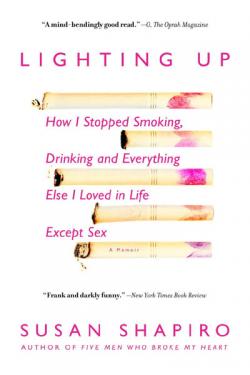 What do you think your book says about the romantic stereotype of a writer whose brilliance relies on his/her addictions?

"The romantic stereotype that artists can only create while smoking, drinking, or taking drugs is a lie," Shapiro said. "It's the exact opposite. Often the exact thing stopping or blocking you from being successful and profound is an addiction. Since I became smoke free and sober five years ago, I have signed five book deals and a movie deal and all of my mentors and critics say it's the best work I've ever done. I've also been a much better teacher, much closer to my husband and interestingly his career has really heated up too--which I think is connected to my clear-headedness."

Why did you decide to quit smoking and drinking? Was there one particular incident in your life that made you realize you needed to address these issues?

"As I chronicle in LIGHTING UP, my addiction specialist Dr. Winters basically told me I wasn't writing and publishing good books because I was going about work the way an addict does--cutting corners, being impatient, not following rules, going too quick, being a control freak," Shapiro said. "He said if I quit smoking, saw him weekly and did everything he said for a year I'd get wind up smoke free, sober, and have my book published. He inspired me and he was right!"

What was the hardest part of overcoming your addictions?

"The hardest part of the recovery was that every time I'd quit something I'd find myself addicted to something else," Shapiro said. "When I stopped smoking cigarettes, I wound up smoking dope more and I had to stop that. Then I started drinking. Then I used food as a substitution. Dr. Winters calls it 'the substance shuffle' and says, 'All excitement is suspect.' So now I realized that I have a very addictive personality and have to be vigilant. I am now addicted to email, book events, and book deals."

How do you think your depression affected your recovery?

"Dr. Winters says 'Underlying every addiction I've ever seen is a deep depression that feels unbearable.' But, it's not unbearable, it just feels that way," Shapiro said. "So when I got rid of the external Band-Aids that were masking my depression, I at first felt worse. I was very sad and weird for nine months. But he taught me how to 'suffer well' and after nine months the darkness cleared and I've since had the happiest, most productive five years of my life."

What tips do you have for LoveToKnow's readers who want to overcome their addictions to cigarettes and/or alcohol?

"I'd highly recommend that addicts read LIGHTING UP, and seek out one-on-one addiction therapists," Shapiro said. "Every addiction is different but the more methods you combine, the better your chance of quitting."

"Do an all-out assault. Get the nicotine patch, go to AA or NA meetings, see an addiction shrink, try to exercise more, don't hang out at bars or parties where people smoke or drink, don't hang out with other addicts, and keep a journal about what you're going through. You should write a list of all the dreams you've been deferring. I find that when you get rid of toxic habits from your life, there's room for more beautiful things to take their place!"