Drug tests are a common way for employers and athletic departments to check for illegal or banned substance abuse. In fact, home drug tests are available for purchase at the local drugstore or online, usually marketed towards parents concerned about their children.

People are usually tested in one of three ways. Urine tests detect trace amounts of the drug in a person's system, although they cannot tell when the drug was ingested. Blood tests can tell the exact amount at the time of the test, and determine whether or not a person was under the influence at the time of the test. Saliva, hair, and sweat specimen tests can also be used to detect the presence of specific drugs, though they are not as common.

Testing for a Body's Reaction

When you take any drug, whether it is legal or not, the body begins the work of breaking it down. To do so, it creates metabolites, which are stored in body fat and eventually excreted through the urine. Blood drug screens can test for both metabolites and the active drug in the system, and the other types of screenings only test for metabolites.

Both types use chemicals known as antibodies, which react in a certain way when they encounter the drugs or metabolites. If these initial tests are positive, testing companies delve further using gas chromatography mass spectrometry. This test allows scientists to separate the molecules of the solution and look at them up close. It is considered a very effective test, but it is also expensive to perform, so it's not generally used when an initial test comes back negative.

According to National Council on Alcohol and Drug Dependence, one of the leading testing companies in the U.S., popular drugs can be detectable for the following lengths of time in bodily fluids:


Hair can test positive for up to three months from exposure to a drug.

Several government agencies or industries regulated by the Federal Government require employees to be regularly tested for drugs. For example, the Federal Aviation Administration, Department of Defense, Federal Transit Authority, and Federal Railroad Commission all have drug test regulations stipulated for employees. The reason is for the safety and security of other employees and the public in general.

Private sector employers also have the option to drug test. According to the National Council on Alcoholism and Drug Dependence, drug use costs employers $81 billion each year, due to injuries, theft, low morale, health care and legal costs.

Reasons for drug testing in the workplace include:

Times when employers drug test vary. Some do pre-employment screening and follow-up tests at annual physicals. Other workplaces test after accidents or after a pattern of documented unfit behavior occurs. Many workplaces with safety and security concerns employ the use of random testing.

For workplaces that send employees to rehab or treatment centers, testing is done to ensure the reinstated employee is no longer using. Along with federal guidelines, many states have adopted rules regarding workplace testing. The U.S. Department of Labor has information regarding the varying rules for each specific state.

With the amount of money and fame involved in professional and amateur sports, athletes have a large incentive to use illegal or banned substances to enhance their performance. According to the World Anti-Doping Agency, doping threatens the health of athletes and the integrity of professional sports. Several of the most commonly abused drugs in the sporting world include:

Additionally, athletes are tested for banned over-the-counter substances that may not be "illegal" drugs. Many are discouraged from taking nutritional supplements that have not been tested by the Food and Drug Administration or that may have unknown substances. Oftentimes, in major sporting events like the Olympics, athletes must submit to urine screens immediately after winning or placing highly in their events.

Purchased from sites like Amazon and drugstore.com, home drug test kits promise accurate results. While some kits require samples to be mailed into a laboratory, others offer fast results at home. These kits can test for: 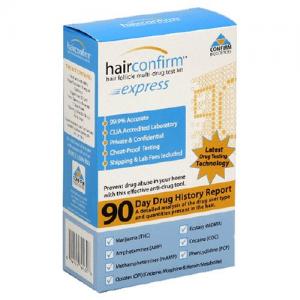 One of the most comprehensive is the panel test by Devon Laboratories, which you simply screw into the provided urine sample cup and read after five minutes. It tests for the metabolites of ten different specific drugs.

The Hair Confirm test is more discreet. You take the hair from the person you are testing and deposit it into a foil pouch, then into a specimen bag, then into the provided envelope to mail to the testing center.

Remember, when you are testing at home that there is a chance for false positives. It is important to repeat the test or to confirm the results by visiting a reputable lab, especially if you're taking the test for legal reasons.

The drug testing game continues to be a battle between the drug testers and the drug users; users try to develop new drugs that are not detectable by traditional means, and testers try to create more advanced tests to check for these new substances. While some may count on taking substances that are undetectable or cheating drug tests by other means, they should be aware that this behavior may catch up with them, even if it takes years.