The smell of marijuana is easily distinguishable if you've ever been around it. Due to its increased legality, this is an odor you might encounter more often. Before or after it's smoked, marijuana has a strong musky odor, similar to a skunk, with other herbal undertones. If you have not been exposed to this scent before, there are a few key factors that can help you identify it.

Marijuana will smell differently depending on the strain. In general, marijuana in the bag will have a combination of a few scents, such as woody, earthy, musky, citrus, skunk, floral, and/or pine notes with one smell tending to dominate. Often times, marijuana is stored in small airtight containers that dampen the smell significantly. Stinkier marijuana strains include Cat Piss, Space Queen, and Super Skunk. Space Queen is said to smell similar to spoiled dairy, while Cat Piss and Super Skunk are aptly named for their stinkiness.

The marijuana plant will vary in scent depending on how mature the plant is. Immature plants tend to smell less, and if stored appropriately, a scent may not even be detectable. More mature plants will have a stronger odor. The plant can smell earthy, floral, or woody and have notes of pine and skunk, depending on the strain. The weather can also influence scent with heat intensifying the odor, so you may notice the smell more on hot days.

During the smoking process, marijuana will smell like the dominant notes in the strain. However, smoking adds some other layers to the odor, including the scents of fire, smoke, and a stronger skunk smell. Some strains have fruity scents, while others tend to be more earthy, musky, and herbaceous. The smell can be strong enough to stink up a room or even an entire house, depending on how much was smoked. If someone is smoking in a car, the scent can penetrate the upholstery and can be difficult to cover or get rid of.

Marijuana smells very similar after being smoked as it does during the smoking process. This is especially true if the smoke gets on your clothes, sheets, upholstery, or other fabric sources that tend to absorb smells. Most people note that it smells like the dominant strain notes mixed with a skunky odor. For example, if the strain has a lot of lemon notes, after it has been smoked, it will smell faintly of lemon and skunk.

There are many other living things that can smell like marijuana. The following have the potential to trick your mind into thinking you're smelling marijuana: 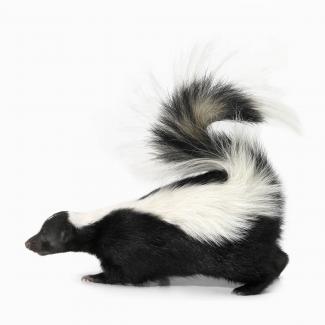 Just like anything, some people find the smell pleasant, while others cannot stand the scent that accompanies marijuana. Chances are if you're smelling something vaguely reminiscent of a skunk mixed with herbs, floral, or citrus notes and without the telltale skunk smell of sulfur, it's probably marijuana.

2
Comments
© 2006-2021 LoveToKnow, Corp., except where otherwise noted. All Rights Reserved.
Resources, Advice & Tips for Covid-19
Read More
What Does Marijuana Smell Like?