Although advocates of marijuana use will often disagree, it is possible to overdose on weed. However, an overdose on marijuana alone is very unlikely to be fatal. That does not mean a marijuana overdose is not a potentially serious health concern. Many factors can affect how marijuana reacts in the body, so it is not always a safe drug, despite what dedicated marijuana supporters say.

Risk by Route of Administration

The way pot is ingested can affect the likelihood of a negative reaction and/or actual overdose. There is a great deal of controversy about overdosing on pot, partly because pot is not usually fatal and thus not widely researched, and partly because the product is now legal in many states and available in a variety of new forms.

A typical dose of marijuana is about 10 mg of tetrahydrocannabinol (THC), but new users are often cautioned to go slow and low, beginning with a 5 mg dose to see how they respond. Marijuana can affect different people in different ways, and the amount needed to overdose or feel adverse effects is specific to each person.

Smoking marijuana either in a pipe or via a joint has been the most common method of using pot in the past, and with smoking, it is very unlikely that users will overdose unless the weed has been treated with other, more potent substances. In order to die from smoking marijuana, a user would have to inhale approximately one-third their body weight all at once, though it is possible to experience negative side-effects at significantly lower doses. The effects from smoking THC last about 45 minutes to a couple of hours, as a rule.

The legalization of pot in many states has led to the creation of other methods of use that have become quite popular and could potentially be more likely to lead to overdose. Consuming pot in edibles, such as brownies and cookies, delays the onset of the effects, but they will also last longer. Because the effects are delayed, users may tend to over consume pot when they eat it as compared to smoking it. The effects of edibles can last from six to eight hours.

In one instance, a 19-year-old man lost his life when he jumped from a balcony after consuming six marijuana-laced cookies, despite being warned not to do so. The cookies contained over 65 mg of THC, the primary psychoactive chemical in marijuana. 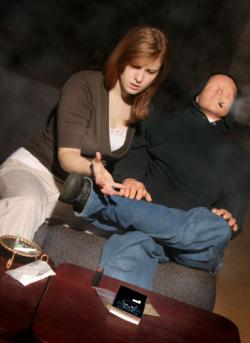 Dabbing is a relatively new phenomenon and involves ingesting extremely concentrated amounts of THC by various means. These concentrates are known by a variety of street names: wax, ear wax, budder, honey oil, shatter and/or butane honey oil (BHO). They contain anywhere from 40 to 80 percent THC, about four times the amount of top-quality, medical-grade marijuana, which contains about 20 percent THC.

Concentrates are usually inhaled via an electronic cigarette (e-cig or e cig) device. A 'dab' of the substance is placed in the e-cig, where it is heated and the vapors inhaled. This method is smokeless and odorless, making it a popular choice. It is much easier to overdose on concentrates, and users interested in trying concentrates are strongly cautioned to know what they are getting into. Even at a minimum concentration, dabs are at least four times stronger than a joint, and the high comes all at once. Withdrawal symptoms are likely to be more intense, and the risk of overdose increases significantly.

According to Healthline News, dabbing is very dangerous and has led to many being sent to the emergency room. The intense buzz can cause hallucinations and loss of consciousness and may directly or indirectly result in death. Dabbing is regarded as much more dangerous than smoking cannabis, even by veteran pot smokers.

Not only does dabbing increase the likelihood of overdose, it is very dangerous to produce. The process requires the use of butane, which can easily explode. The incidence of butane explosions increased from 12 to 32 in Colorado from 2013 to 2014, when making concentrates became legal in that state.

The Center for Disease Control (CDC) does not record any known deaths that are related directly to the active drugs in marijuana, but there are a number of symptoms that can potentially need some form of treatment and perhaps hospitalization:

What to Do in the Event of an Overdose

Any suspected marijuana overdose should be taken seriously and treated. A short-term, mild overdose, which is known as greening out, can probably be managed at home by offering fluids, rest, and reassurance. However, serious symptoms, such as difficulty breathing, hallucinations, or lack of responsiveness, should be addressed immediately by calling 911. Keep in mind there are several diseases, like heart disease or depression, that can exacerbate the symptoms of marijuana overdose, and they can last several days. Treatment for severe symptoms may include:

Electing to use marijuana for either recreational or medicinal purposes is a personal choice, but one that should be undertaken with full knowledge of the potential consequences. Any concerns and questions regarding its use should be discussed with a knowledgeable medical professional who is familiar with your particular health history. As with any other drug, if you believe an overdose has occurred, get help right away.

0
Comments
© 2006-2020 LoveToKnow, Corp., except where otherwise noted. All Rights Reserved.
Resources, Advice & Tips for Covid-19
Read More
Can You Overdose on Weed?