In December 2020, the government released new Australian alcohol guidelines. Based on four years of extensive evidence reviews, these are designed to reduce your risk of being harmed by alcohol.

Alcohol is the most widely used drug in Australia. If you don't use it carefully, it could make you sick or lead to you or someone nearby being injured.

If you're a healthy adult, you should have no more than:

Children and young people under 18 should not drink any alcohol. This is because young people often take more risks and drink more (for example, by binge-drinking), which increases their chances of suffering immediate harm (such as an accident or alcohol poisoning).

Australian Alcohol Guideline 3 - For Women Who Are Pregnant or Breastfeeding

Pregnant women, and those planning a pregnancy, should not drink any alcohol. It's also safest for the baby if breastfeeding women don't drink alcohol.

Drinking while you're pregnant can increase the risk of complications including bleeding, miscarriage, premature birth or stillbirth. And because alcohol can travel through the placenta, if you drink while you're pregnant, your baby could end up with one or more behavioural, mental, physical, and learning disabilities (including foetal alcohol spectrum disorder).

If you're breastfeeding, alcohol can also pass into your breast milk and could negatively affect baby's development, along with their feeding and sleeping patterns.

What Is the Alcohol Content of a Standard Drink?

A standard alcoholic drink contains 10 grams of pure alcohol, regardless of whether it's wine, beer, or spirits. However, some drinks have a higher alcohol concentration than others. This means the 10 grams of alcohol is contained in a smaller drink.

What Are the Australian Alcohol Guidelines Based On?

The 2020 guidelines reflect research conducted since the previous guidelines (from 2009) were released, explains Professor Kate Conigrave, chair of the NHMRC'S Alcohol Working Committee.

"It was timely to review the new available evidence. In particular, there has been growing evidence of an increased risk of cancer from quite low levels of drinking," says Professor Conigrave, who is also the Senior Staff Specialist and Professor of Addiction Medicine at Royal Prince Alfred Hospital and Sydney Medical School, the University of Sydney.

She adds the new guidelines have also "strengthened and clarified the advice for people under 18 years of age, and for women who are pregnant or planning to get pregnant, to not drink. So, the wording changed from 'not drinking alcohol is the safest option' to 'should not drink alcohol'," she says.

The recommended maximum of four standard drinks on any given day did not change.

How Much Alcohol Is Safe to Drink?

There is no safe amount of alcohol to drink. The Australian Alcohol Guidelines are designed to lower the risk of harm, but following them doesn't eliminate the health risk altogether.

"Every year there are more than 4,000 alcohol-related deaths in Australia, and more than 70,000 hospital admissions," Professor Paul Kelly (Australia's Acting Chief Medical Officer at the time) said in a statement. "Healthy adults drinking within the guideline recommendations have less than a 1 in 100 chance of dying from an alcohol-related condition," he said in a statement.

Professor Conigrave explains that regularly drinking alcohol will increase your risk of developing several cancers, uch as pancreatic, liver, breast, colorectal, oesophageal, mouth and throat (larynx and pharynx) cancers. "Your risk will increase from quite low levels of drinking (especially for colon and breast cancer), and will continue to increase as more alcohol is consumed," she says.

"Alcohol has also been associated with a range of long-term health conditions such as high blood pressure, heart disease, (even heart failure), some types of stroke, liver disease, alcohol use disorders and cognitive impairment. It can interfere with sleep and worsen most mental health problems."

Furthermore, short-term drinking that goes over the recommended limit is "linked to increased risk of injuries in particular, but also to heart rhythm problems (arrhythmias), and other medical harms," she says.

And while most Australians know you can only drink so much and stay under the blood alcohol concentration limit that's legally allowed when you're driving, many aren't so sure about what constitutes excessive alcohol consumption and when drinking can start negatively affecting your health.

As Professor Conigrave reiterates, keeping your consumption to the levels set out in the guidelines reduces your risk of harms from alcohol, but doesn't take away all risk. 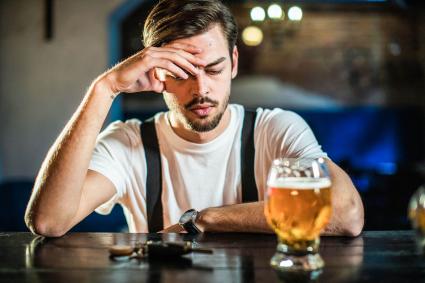 How Much Do Alcoholics Drink?

Worried you might be drinking too much? Professor Conigrave says the World Health Organisation has criteria for defining when a person is alcohol-dependent, or alcoholic. "It is more than just daily drinking. It involves the presence of a strong internal drive to drink, that can continue despite clear harms from alcohol. There may be tolerance, or withdrawal features, and loss of control over drinking.

"However, if a person drinks every day, they can become more tolerant to alcohol, and find they need more to feel the desired effect. For some individuals the level they drink keeps creeping up, and they can be at risk of becoming dependent on alcohol."

The Australian Government's Healthdirect website points out that drinking has become normalised in Australian culture, so it can be hard to know if you're drinking too much.

They also have a list of signs that your drinking may be a problem, such as needing to drink more to feel the same effects, or if drinking is starting to impact your job or relationships.

As Professor Conigrave says, some people, such as those who have difficulties controlling their drinking or health problems that could be made worse by alcohol, should drink less or not at all. "Also, in some circumstances, like driving, not drinking is clearly the way to go."

If you're worried about your drinking, talk to a health professional about resources and support for managing your alcohol consumption.

Follow the New Alcohol Guidelines to Reduce Risk of Harm

The 2020 Australian alcohol guidelines are based on extensive research into the health effects of alcohol consumption. To minimise your risk of harm from alcohol, limit your drinking to the recommended limits - no more than 10 standard drinks per week, and no more than four standard drinks per day. Seek professional support if you, or other people, are concerned about your drinking.

Comments
© 2006-2021 LoveToKnow, Corp., except where otherwise noted. All Rights Reserved.
Australian Alcohol Guidelines: How to Stay Safe When Drinking